Did you know?
NASA’s On-orbit Servicing, Assembly, and Manufacturing 1 (OSAM-1) mission plans to robotically refuel Landsat 7—a satellite that wasn’t designed to be serviced. + details

The government-owned Landsat 7 was successfully launched on April 15, 1999, from the Western Test Range of Vandenberg Air Force Base, California, on a Delta-II expendable launch vehicle. The Earth observing instrument on Landsat 7, the Enhanced Thematic Mapper Plus (ETM+), replicates the capabilities of the highly successful Thematic Mapper instruments on Landsats 4 and 5.

The ETM+ also includes additional features that make it a more versatile and efficient instrument for global change studies, land cover monitoring and assessment, and large area mapping than its design forebears.

Landsat 7 at the time was the most accurately calibrated Earth-observing satellite, i.e., its measurements are extremely accurate when compared to the same measurements made on the ground.  Landsat 7’s sensor has been called “the most stable, best characterized Earth observation instrument ever placed in orbit.”  Landsat 7’s rigorous calibration standards have made it the validation choice for many coarse-resolution sensors.

The excellent data quality, consistent global archiving scheme, and reduced pricing ($600) of Landsat 7 led to a large increase of Landsat data users. In October 2008, USGS made all Landsat 7 data free to the public (all Landsat data were made free in January 2009 almost immediately leading to a 60-fold increase of data downloads). [See also, Zhu et al., 2019.] 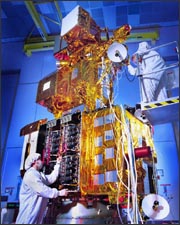 Considered a calibration-triumph, the Landsat 7 mission went flawlessly until May 2003 when a hardware component failure left wedge-shaped spaces of missing data on either side of Landsat 7’s images.

Six weeks after suffering the loss of its scan line corrector (SLC), the ETM+ resumed its global land survey mission resulting in only a short suspension of its imagery acquisitions for the U.S. archive. However, the malfunction has impacted the imagery of Landsat 7.

Specifically, the ETM+ optics contain the Scan Mirror and Scan Line Corrector assembly among other components. The Scan Mirror provides the across-track motion for the imaging, while the forward velocity of the spacecraft provides the along-track motion. The Scan Line Corrector (SLC) assembly is used to remove the “zigzag” motion of the imaging field of view produced by the combination of the along- and across-track motion. Without an operating SLC, the ETM+ line of sight now traces a zigzag pattern across the satellite ground track.

In this SLC-off mode, the ETM+ still acquires approximately 75 percent of the data for any given scene. The gaps in data form alternating wedges that increase in width from the center to the edge of a scene.

The remainder of the ETM+ sensor, including the primary mirror, continues to operate, radiometrically and geometrically, at the same high-level of accuracy and precision as it did before the anomaly; therefore, image pixels are still accurately geolocated and calibrated.

To fulfill the expectations of the user community for full coverage single scenes, data from multiple acquisitions are being merged to resolve the SLC-off data gaps. In all cases, a binary bit mask is provided so that the user can determine where the data for any given pixel originated. The USGS is continuing to research other methods of providing better merged data products, and will continue to provide information resulting from this work as it becomes available.

Hallmarks of the Landsat 7 mission:

1. Mission Continuity: Landsat 7, launched in 1999, is part of a long history of land remote sensing spacecraft, spanning 40 years of multispectral imaging of the Earth’s surface, starting with the launch of Landsat 1 in 1972. In particular, the ETM+ continues the database of Earth imagery begun in 1982 by the Landsat 4 Thematic Mapper, providing the same spectral bands for consistent change detection.

2. Global Survey Mission: Landsat 7 data is acquired systematically to build and periodically refresh a global archive of sun-lit, substantially cloud-free images of the Earth’s landmass. Approximately one quarter of the Earth’s landmass is imaged every 16 days, using a planning scenario that emphasizes seasonal changes in vegetation and uses cloud predictions from NOAA to avoid imaging cloudy areas, thus optimizing the data acquisition strategy. If the data user wants a particular image, chances are that it is already in the data archive. Also, as environmental changes occur on the Earth’s surface, it is highly probable that recent prior data already exists and can be quickly retrieved to compare with newly acquired data.

3. Affordable Data Products: As of Oct. 1, 2008 all Landsat 7 data became free to the public. In December 2009, all Landsat data in the USGS archive followed suit. Initially, Landsat 7 data products were available from the USGS Center for Earth Resources Observation and Science (EROS), Sioux Falls, South Dakota at “the Cost of Fulfilling User Requests,” known as the COFUR price. This was a significant price reduction from commercial data sales, allowing renewed use of Landsat data in academic institutions for scientific research. COFUR stimulated the use of multispectral imagery in a variety of applications, and fostered new uses of Landsat data. The now freely available data has greatly amplified this effect.

4. Absolute Calibration: Landsat 7 data from the ETM+ is calibrated to better than 5%, and serves as an on-orbit standard for cross-calibration of other Earth remote sensing missions. NASA orbited the Terra (EOS-AM1) spacecraft and EO-1 in formation with Landsat 7 to take advantage of this enhanced calibration.

These features, combined with all the traditional utility of Landsat data proven over 40 years, makes Landsat 7 data important for a wide and diverse remote sensing community.