Landsat at 40: The Long View of Earth from Space

Landsat at 40: The Long View of Earth from Space 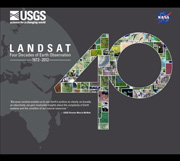 The world’s longest-running Earth-observing satellite program—Landsat—is 40 years old. NASA—working in cooperation with the U.S. Department of the Interior (DOI) and its science agency, the USGS—launched the first Landsat satellite on July 23, 1972. The resulting 40-year archive of Earth observations from the Landsat fleet forms an impartial, comprehensive, and easily accessed register of human and natural changes on the land.
Remote-sensing satellites, such as the Landsat series, help scientists to observe the world beyond the power of human sight, to monitor changes, and to detect critical trends in the conditions of natural resources. Data supplied by Landsat supports the improvement of human and environmental health, energy and water management, urban planning, disaster recovery, and crop monitoring.
Through 40 years of continuous coverage, the Landsat series of Earth observation satellites has become a fundamental global reference for scientific issues related to land use and natural resources. Landsat is valued all over the world as the gold standard of land observation. No other satellite program, in our nation or in any other country, comes close to having the historical length and breadth, the continuity and the coverage, of the Landsat archive.
A Versatile Perspective
Landsat satellites can give us a view as broad as 12,000 square miles per scene while characterizing land cover in units the size of a baseball diamond. In one instant look from over 400 miles in space, a single Landsat scene can record the condition of hundreds of thousands of acres of grassland, agricultural crops, or forests.
Landsat images from space are not just pictures. They contain many layers of data collected at different points along the visible and invisible light spectrum. Consequently, Landsat images can show where vegetation is thriving and where it is stressed, where droughts are occurring, where wildland fire is a danger, and where erosion has altered coastlines or river courses.
Landsat images reveal subtle, gradual changes, such as Wyoming rangelands greening up after a drought, as well as massive landscape changes that occur in rapidly growing urban areas. Landsat can also provide inexpensive assessments of sudden natural or human-induced disasters, such as the number of acres charred by a forest fire or the extent of tsunami inundation.
Impartial information freely available
The Department of the Interior’s policy of releasing the full Landsat archive at no cost allows everyone to have access to this important resource, allowing researchers in the private sector and at universities to generate even more data applications—applications that serve commercial endeavors in agriculture and forestry, that enable land managers in and out of government to work more efficiently, and that define and tackle critical environmental issues.
Landsat and innovation
Landsat has sparked innovation in Earth systems research and in commercial applications of the data from its inception in the mid-1960s. Since 2008, when Landsat images were made available free of charge, there has been a remarkable burst of innovative science applications of the data.


For example, Landsat data played a central role in an award-winning type of mapping that tracks water use. Using Landsat imagery supplied by USGS in combination with ground-based water data, the Idaho Department of Water Resources and the University of Idaho developed a novel method to create water-use maps that are accurate to the scale of individual fields. Water-use maps help save taxpayer money by increasing the accuracy and effectiveness of public decisions involving water—for instance, in monitoring compliance with legal water rights. In 2009, the Kennedy School of Government at Harvard University cited Idaho’s original design for these maps as an outstanding innovation in American government.
In the beginning
By the mid-1960s, some civilian geologists, geographers, and agronomists were familiar with imaging potential of classified Earth-observing satellites and had also studied the surprisingly detailed land-surface photos taken by early astronauts using hand-held cameras.
In 1966, with NASA still heavily committed to the Apollo Program in preparation for what would be a 1969 moon landing, the USGS convinced Interior Secretary Stewart Udall to hold a press conference announcing Interior’s new Project EROS, the acronym for Earth Resources Observation Satellites, and, furthermore, that Interior’s first satellite would launch in 1969!
In a statement that echoes true to this day, Udall said, “…the time is now right and urgent to apply space technology towards the solution of many pressing natural resources problems being compounded by population and industrial growth.” This bold announcement succeeded as a catalyst for what eventually became the world’s first civilian land-imaging satellite, developed by NASA and launched on July 23, 1972.
Six years earlier, Udall had said the satellite would be “…just the beginning of a great decade in land and resource analysis for a burgeoning population.” Today we celebrate not one but four great decades in Earth science from space.
On the horizon
NASA is preparing to launch the next Landsat satellite, the Landsat Data Continuity Mission (LDCM), on February 11, 2013, from Vandenberg Air Force Base in California. LDCM will be the most technologically advanced satellite in the Landsat series. LDCM sensors take advantage of evolutionary advances in detector and sensor technologies to improve performance and increase reliability. Once it successfully achieves orbit, LDCM will join the Landsat 5 and Landsat 7 satellites as Landsat 8 to continue the Landsat data record.
Join the celebration
NASA and USGS held a news conference, July 23, to highlight the accomplishments of the Landsat program at the Newseum in Washington, DC.
For more information:
+ Landsat at 40: The Long View of Earth from Space
+ NASA Goddard Multimedia.
PrevPreviousThe Longest Continuous View of Earth From Space Hits 40
Next40 Years of Earth Observation: From the BeginningNext
Prev
Next
On Key

A new analysis found that between 34,000-38,000 could have been reduced with local increases in green vegetation in US metropolitan areas from 2000-2019.

Landsat 9 in the 2021 Goddard Annual Report

Landsat 9’s first light image was featured on the cover of the 2021 Goddard Annual Report.