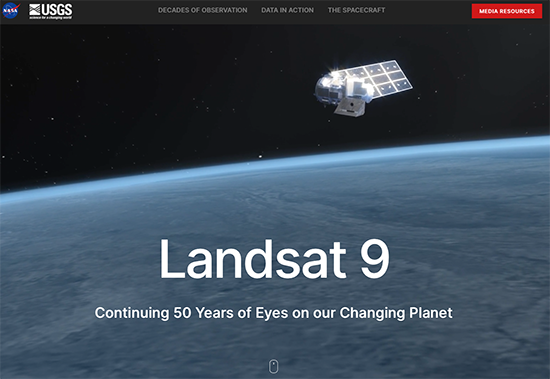 August 16, 2021 • Landsat 9, a joint NASA and U.S. Geological Survey satellite mission, is scheduled to launch Thursday, Sept. 16, from Vandenberg Space Force Base in California. To help the media and public learn more about the project and its near 50-year history, NASA has launched a new interactive website:

Members of the media are also invited to a remote media briefing Tuesday, Aug. 31, tentatively scheduled for 10 a.m. EDT. The briefing will allow reporters to address questions to scientists, mission managers, and data use experts. To RSVP for the briefing, contact Tylar Greene at: tylar.j.greene@nasa.gov.

The Landsat Program missions changed the field of Earth science when the Landsat 1 satellite launched in 1972. In 2008, the program created new opportunities for research around the world when it made decades of Landsat data available to the public for free.

Landsat’s data of Earth’s surface as seen from space have transformed scientists’ understanding of regional, national, and global-scale changes in land use and land cover, providing information for sectors including agriculture, forestry, urbanization, hydrology, and homeland security and disaster mitigation. Landsat 9 will continue this record of monitoring key natural and economic resources, as well as global environmental changes into the future.

Once fully commissioned in orbit after launch, Landsat 9 will replace Landsat 7 and join its sister satellite, Landsat 8. Together, they will collect images that capture Earth’s land surfaces every eight days.

The instruments will capture more than 700 new images daily across 11 wavelengths at 30-meter resolution. This resolution is fine enough to detect even small agricultural fields, buildings, forest stands, and lakes, while still providing a broad enough swath to cover large areas of terrain. With its 11 wavelengths, the instruments will capture information about Earth, including data related to coastal waters, forests, healthy and unhealthy plants, and wildfire scars in the visible light to thermal infrared ranges.

United Launch Alliance is the spacecraft provider for Landsat 9’s launch. Northrop Grumman built the Landsat 9 spacecraft, integrated it with instruments, and tested the observatory.

The U.S. Geological Survey Earth Resources Observation and Science Center will operate the mission and manage the ground system, including maintaining the Landsat archive.

To date, more than 18,000 peer-reviewed research papers have used Landsat data, and many public and private programs use it to support agriculture, forest management, urban development, wildfire-damaged vegetation recovery, and many more applications.