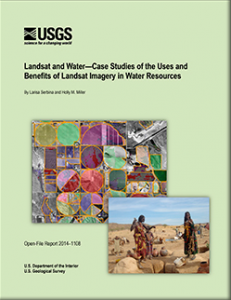 [By Larisa Serbina and Holly M. Miller, USGS] Water availability and allocation are issues gaining a great deal of attention, particularly in arid climates. Increases in population growth and recent droughts bring urgency to measuring and monitoring water use in areas such as the western United States, where the majority of the water has already been allocated.
In the world of water resource management, Landsat has played a key role in providing objective and continuous data for the United States, particularly in the arid west. Water-related benefits of Landsat imagery are also reaped far beyond the United States’ borders in countries such as Chile, Australia, Morocco, Sudan, and Venezuela, which are using Landsat data to make informed decisions regarding natural resource allocation and use.

Federal Use of Landsat Imagery in Water Resources

The Water Accounting and Verification group of the U.S. Bureau of Reclamation (Reclamation) uses Landsat data for various tasks. These include mapping, monitoring, and quantifying crop and riparian vegetation types and associated acreage for water resource and other management activities. The monitoring area includes the Colorado River from the Hoover Dam to Mexico and the adjacent agricultural areas. This represents approximately 870,000 acres of irrigated lands and approximately 500,000 acres of riparian area, totaling 1,370,000 acres. Landsat imagery is used as an input in a variety of analyses including:

Reclamation projects require detailed current and historical land-use data. Although programs such as National Agricultural Statistics Service (NASS) cropland mapping provide land-use data, the data is presented for large scale analysis to identify trends at state or national scales. State- and national-level statistics are insufficient in addressing the many requirements for the uses listed above and described below. However, the results of Landsat-based analyses can be summarized at the individual agricultural field level, within irrigation district boundaries, outside of irrigation district boundaries, within wildlife refuges, by river reach, and within any site specific geographic area on the system (for example, a conservation unit). Additionally, many fallowing programs, drought studies, groundwater studies, and so on, require historical and current data to establish both baseline and current conditions. Historical data and current data at the smaller scale are often times non-existent outside of data derived from satellite imagery. Generating comparable data without Landsat would require an increased amount of fieldwork and time costs, and would hinder the accuracy and temporal consistency in the data.
Landsat imagery is unique in that it comes from a series of satellite sensors that have been continuously and consistently monitoring the Earth’s surface since the 1970’s. Leveraging these data to provide products such as estimates of land-use change and evapotranspiration through time (using energy balance algorithms) represents a significant cost savings as the examples below demonstrate. Even more so, Landsat imagery makes it possible to generate these types of data sets at a level of accuracy not possible without Landsat data (Jeff Milliken and Paul Matuska, Bureau of Reclamation, oral commun. and written commun., 2013).

Reclamation is responsible for multi-year riparian and irrigated acreage analysis and associated water use for planning and projecting future water needs. They use calculation methods based on crop-coefficient curves with crop data generated from Landsat imagery to estimate evapotranspiration from irrigated lands. Reclamation is also in the process of actively testing energy balance algorithms such as METRIC (Mapping EvapoTranspiration at high Resolution with Internalized Calibration), which uses Landsat imagery, as a supplement to the current methodology. Based on comparable spectral and spatial resolutions, SPOT or DMC satellite data could be used for mapping agricultural types without the availability of Landsat. However, because these sensors do not have a thermal band, energy balance algorithms such as METRIC could not be used for estimating evapotranspiration. For riparian and agricultural monitoring alone, access to no-cost Landsat data represents an annual cost savings of approximately $40,000. Another alternative would be to conduct 100 percent field-based monitoring as opposed to the 10 percent field sample required for the current Landsat-based methodology. This method would see a ten- to twentyfold increase in costs per year. In order to accomplish this sampling task, two federal term employees would be needed for 10 months to sample everything currently sampled now at the same frequency. The costs for data collection alone would be around $580,000, based on an $80/hour burdened rate for two people and travel expenses. Additional costs for data processing would follow data collection (Paul Matuska and Jeff Milliken, Bureau of Reclamation, oral commun. and written commun., 2013).

The Colorado River Basin Project Act of 1968, Public Law 90-537, Section 601 (b)(1), dated September 30, 1968, directs the Secretary of the Interior to “make reports as to the annual consumptive uses and losses of water from the Colorado River System after each successive five-year period, beginning with the five-year period starting on October 1, 1970.” Reclamation is investigating the use of historic Landsat data with energy balance methodologies such as METRIC, to improve estimates of agricultural evapotranspiration estimates for both historic and current periods. These efforts will provide agricultural estimates of consumptive use in the Lower Basin’s tributaries to the Colorado River. Ultimately, the natural flow model of each tributary will assist in modeling the water supply for the Colorado River (Paul Matuska, Bureau of Reclamation, oral commun. and written commun., 2013).
In order to complete this task using energy balance algorithms, frequent (usually monthly) multi-spectral and thermal imagery is needed. Without the availability of archived Landsat data from 1972 to 2012, this would not be possible. Although SPOT satellite data could be used to estimate evapotranspiration using a vegetation index or other methods (no thermal band), the SPOT 1 satellite was launched in 1986, preventing any analysis prior to that year. Considering that for this project 1 million acres of agricultural land are assessed with 8 analysis periods since the 1970’s (every fifth year), and using a monthly time step needed for an energy balance algorithm, a total of $450,000 in image costs ($75,000 per analysis period) would have been incurred if SPOT imagery had been purchased since the 1980’s when it first became available. Commercial satellite systems would be more expensive than this, while MODIS would not be a suitable substitute due to its resolution being too coarse to provide the needed accuracy for the field-level consumptive use measurement (Jeff Milliken, Bureau of Reclamation, oral commun. and written commun., 2013).

Reclamation evaluates water conservation plans by using Landsat data to determine present and historical irrigation practices. This helps in the decision-making process to determine which conservation activities result in water savings to the system. Landsat data is also used to verify conservation under the Inadvertent Overrun and Payback Policy (IOPP), Intentionally Created Surplus (ICS), and System Conservation (SC) programs. The imagery is used for verification of land fallowing activities for these programs. Landsat infrared imagery easily lends itself to be used for identification of fallow and irrigated land. Figure 1 shows a clear distinction between irrigated (in red) and fallow (in light green) land, making the identification and verification process easy. Landsat imagery helps with the determination of authorized and unauthorized land use, analysis of land-use change over time, and estimation of future land-use demands. Only 5 percent of fields are visited in person, while the rest are verified through Landsat imagery review. In the case that Landsat data is not available, the percent of field visits would increase to 100 percent for all fields that require monitoring per particular fallowing agreements. Additional time and costs would be associated with the latter approach. Landsat imagery is also used to determine past and current cropping patterns and associated water use in potential habitat conservation areas for the Multi-Species Conservation Program (MSCP) as well as water balances for MSCP. Archived and current Landsat data make the analysis possible at the field level. Although other historical data for crops exists (such as data produced by NASS), the geographic scale is often limited to counties, which makes analysis of land change on a smaller geographical scale impossible without satellite imagery (Paul Matuska, Bureau of Reclamation, oral commun. and written commun., 2013).

Many of the reports and data sets produced by Reclamation are used by other entities, including Federal agencies, State agencies, universities, and private businesses such as agricultural producers and contractors. The USDA uses the Landsat-derived data as control data for their cropland data layer. The USGS and the Arizona Department of Water Resources (ADWR) use the data to estimate annual groundwater withdrawals in the Lake Mohave, Parker, and Yuma Basins. The ADWR also uses the data for agricultural monitoring and evapotranspiration estimates for the Phoenix and Tucson adaptive management areas. The California DWR uses the data to meet California Water Plan requirements and to map agriculture for the Land Cover Mapping and Monitoring Program. Without the information Reclamation produces from Landsat imagery, these organizations would have to either produce the data themselves or find alternatives, both of which may result in additional costs through increased time or money spent.
Further Reading
+ Full USGS Report: Landsat and Water