Most glaciers in every mountain range and island group in Alaska are experiencing significant retreat, thinning or stagnation, especially glaciers at lower elevations, according to a new book published by the U.S. Geological Survey. In places, these changes began as early as the middle of the 18th century.
Although more than 99 percent of Alaska’s large glaciers are retreating, a handful, surprisingly, are advancing.
The Glaciers of Alaska, authored by USGS research geologist Bruce Molnia, represents a comprehensive overview of the state of the glaciers of Alaska at the end of the 20th century and beginning of the 21st century. Richard Williams Jr., an emeritus senior research glaciologist with the USGS, said the 550-page volume will serve as a major reference work for glaciologists studying glaciers in Alaska in the years and decades to come.
The report uses a combination of satellite images, vertical aerial photographs (black-and-white and color-infrared photos taken from airplanes, looking straight down), oblique aerial photographs (color photos taken from the air at an angle, such as most regular photos), and maps, supported by the scientific literature, to document the distribution and behavior of glaciers throughout Alaska.
The author concludes that, because of the vast areas encompassed by the glacierized regions of Alaska, satellite remote sensing provides the only feasible means of monitoring changes in glacier area and in position of termini — the end of a glacier — in response to short- and long-term changes in the marine and continental climates of Alaska.
Alaskan glaciers are found in 11 mountain ranges, one large island, one island chain, and one archipelago. Details about the recent behavior of many of Alaska’s glaciers are contained in this richly illustrated book, with multiple photographs and satellite images, as well as hundreds of aerial photographs by Molnia, taken during his more than four decades of work in Alaska.
Three other USGS glaciologists authored two sidebar sections of the book: Columbia and Hubbard Tidewater Glaciers, by Robert M. Krimmel; and The 1986 and 2002 Temporary Closures of Russell Fiord by the Hubbard Glacier, by Bruce F. Molnia, Dennis C. Trabant, Rod S. March, and Robert M. Krimmel. A third section, Geospatial Inventory and Analysis of Glaciers: a Case Study for the Eastern Alaska Range, was authored by William F. Manley, Institute of Arctic and Alpine Research (INSTAAR), University of Colorado.
This professional paper (USGS Professional Paper 1386-K) is available in print and online. It is the 8th volume to be published in the Satellite Image Atlas of Glaciers of the World series; the other seven volumes are available in print and online. More than 100 glaciologists from the United States and other nations have collaborated with the USGS to produce these 11 volumes.

More About the Book 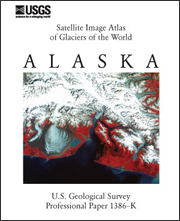 This chapter is the eighth chapter to be released in U.S. Geological Survey Professional Paper 1386, Satellite Image Atlas of Glaciers of the World, a series of 11 chapters. In each chapter, remotely sensed images, primarily from the Landsat 1, 2, and 3 series of spacecraft, are used to study the glacierized regions of our planet and to monitor glacier changes. Landsat images, acquired primarily during the middle to late 1970s, were used by an international team of glaciologists and other scientists to study various geographic regions or to discuss glaciological topics. In each geographic region, the present areal distribution of glaciers is compared, wherever possible, with historical information about their past extent. The atlas provides an accurate regional inventory of the areal extent of glacier ice on our planet during the 1970s as part of a growing international scientific effort to measure global environmental change on the Earth’s surface. This chapter is divided into three parts: Part I, Background and History; Part II, Glaciological Topics; and Part III, Regional Distribution of Alaska Glaciers.
About 5 percent (about 75,000 km2) of Alaska is presently glacierized, including 11 mountain ranges, 1 large island, an island chain, and 1 archipelago. The total number of glaciers in Alaska is estimated at >100,000, including many active and former tidewater glaciers. Glaciers in every mountain range and island group are experiencing significant retreat, thinning, and (or) stagnation, especially those at lower elevations, a process that began by the middle of the 19th century. In southeastern Alaska and western Canada, 205 glaciers have a history of surging; in the same region, at least 53 present and 7 former large ice-dammed lakes have produced jökulhlaups (glacier-outburst floods). Ice-capped Alaska volcanoes also have the potential for jökulhlaups caused by subglacier volcanic and geothermal activity. Satellite remote sensing provides the only practical means of monitoring regional changes in glaciers in response to short-and long-term changes in the maritime and continental climates of Alaska. Geospatial analysis is used to define selected glaciological parameters in the eastern part of the Alaska Range.
Further Information:
+ USGS Book Description
+ USGS Press Release