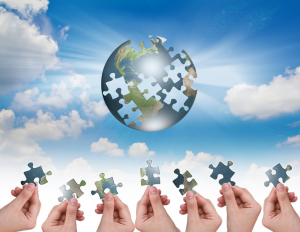 [Source: GEO] In Geneva on January 17, 2014, the Group on Earth Observations (GEO) received unanimous endorsement to unleash the power of open data for a second decade. There was agreement to continue building on the organization’s first 10 years of pioneering environmental advances, which are designed to improve the quality of life of people everywhere. Fueled by open data, GEO’s efforts are now evident in most regions of the world. GEO is comprised of 90 member nations, including the European Commission and 77 Participating Organizations.
“GEO is successfully meeting its mandate, which is to make data and other information open, accessible and easy to discover for decision makers around the world,” said Mr. Janez Potočnik, European Commissioner for the Environment. “GEO’s vision is now operational, a proven force for putting sound science to work across nine essential areas: agriculture, biodiversity, climate, disasters, ecosystems, energy, health, water and weather.”
GEO’s mandate is to drive the interoperability of the many thousands of space-based, airborne and in situ Earth observations around the globe. Without concerted efforts to coordinate across diverse observations, these separate systems often yield just snapshot assessments, leading to gaps in scientific understanding and hampering data fusion in support of better decision making for society. GEO aims to fill such gaps by providing a comprehensive, more integrated picture of our changing Earth. GEO is accomplishing this by establishing a Global Earth Observation System of Systems, known as GEOSS, and a Portal through which data and other information can be easily accessed at little or no cost.
“Rather than snapshot assessments, GEO gives us moving pictures of a changing planet,” said Mr. Cao Jianlin, Vice Minister of the Ministry of Science and Technology of China. “Our world does not work just in the sea, on land, in the atmosphere or in space, and our policies cannot reflect individual domains either.” China, for example, is partnering with 46 other GEO-member nations and several of GEO’s Participating Organizations to ensure that unprecedented data will be available to measure the effects of human activities and natural processes on the carbon cycle, the first such coordinated effort at the global level.
In Africa, 22 nations and 5 GEO Participating Organizations recently launched AfriGEOSS with the goal of strengthening that continent’s capabilities to produce, manage and use earth observations. “This new initiative gives us the necessary framework to support informed decisions about a range of priorities, including food security, access to clean water and sanitation, natural resources, and coastal and disaster management,” said Derek Hannekom, Minister of Science and Technology, South Africa.
By increasing the utility of open data about the Earth, GEO is helping to mitigate disasters, develop water-management strategies, support citizen observatories, and strengthen food security. GEO is driving the development of new tools, such as a cholera early warning system, as well as painting fuller pictures of complex environmental processes, including through global observations of ocean acidification at the global scale and observations of atmospheric greenhouse gases from space. GEO participants are also studying the footprint of mining practices, with the aim of minimizing future impacts on nearby communities and natural habitat, and focusing on links between air quality and health. There is also focus on the far-reaching consequences of melting glaciers and other serious cold-region concerns.
“Increasing access to data and data sharing, both nationally and internationally, is crucial for unleashing innovation across our data-driven economy,” said Dr. Patrick Gallagher, performing the duties of the Deputy Secretary of Commerce.” GEO’s collaborative work to integrate open data about the Earth continues to drive the development of new tools, services and scientific insights that are used around the world to support sound decision making.”

A new analysis found that between 34,000-38,000 could have been reduced with local increases in green vegetation in US metropolitan areas from 2000-2019.

Landsat 9 in the 2021 Goddard Annual Report

Landsat 9’s first light image was featured on the cover of the 2021 Goddard Annual Report.