March 22, 2021 • Come summer, Utahns will flock to the state’s lakes and reservoirs to boat, swim and picnic along the shore. And every week, if not every day, scientists like Kate Fickas of Utah State University in Logan will use satellite images and other data to monitor recreation sites to check for rapid growth of algae into a bloom, and make sure the water is safe for people and pets.

From the vantage point of space, satellites, including the NASA and U.S. Geological Survey’s (USGS) Landsat 8, can help scientists identify lakes where a bloom has formed. It’s a complicated data analysis process, but one that researchers are automating to assist resource managers in identifying potential problems.

“I grew up swimming in the Willamette River in Oregon, and diving in lakes over the summer,” said Fickas. “So it means a lot to me that I’m able to not only help develop algorithms for monitoring cyanobacteria blooms, which is interesting in itself, but to be able to take that next step and keep the public safe, and allow them to safely recreate and enjoy the water the way that I do.”

Blooms are made up of naturally occurring algae, phytoplankton, and cyanobacteria that explode in number under the right conditions: warm temperatures, lots of nutrients, and calm waters. Many water bodies in Utah meet those conditions, Fickas said, especially with warming temperatures due to climate change, as well as nutrient-rich runoff from agricultural fields and other sources.

Satellites including Landsat 8 and ESA’s (the European Space Agency) Sentinel-3 can detect when a lake changes color due to the mats of greenish organisms – allowing scientists like Fickas to tell water managers where to test to see if the waters are harmful or not. The two satellites have different strengths: Sentinel-3 collects data on individual lakes more frequently and measures wavelengths of light that are more indicative of phytoplankton, but Landsat 8 has a higher spatial resolution, so it can observe smaller lakes and identify specific problem areas within a larger lake.

Landsat satellite-based detection of a 2017 bloom in Lake Utah helped save an estimated $370,000 in healthcare and related costs for the area, according to a 2020 study published in the journal GeoHealth. The case study builds on a larger multi-agency project to track algal blooms.

From space, satellites such as the NASA and USGS Landsat 8 can help scientists identify where an algal bloom has formed in lakes or rivers. It’s a complicated data analysis process, but one that researchers are automating so resource managers around the country can use the satellite data to identify potential problems. Video credit: NASA’s Goddard Space Flight Center

When Landsat 8 measures a bloom, it detects chlorophyll-a, a green pigment found in phytoplankton, said Nima Pahlevan, a scientist at NASA’s Goddard Space Flight Center in Greenbelt, Maryland. Water is a tricky thing for Landsat satellites to measure since it’s dark compared to brightly reflective trees, buildings, and other landscapes. But Landsat 8 is more sensitive than its predecessors, able to distinguish between many more intensities of light, essentially detecting more shades of green.

“Any increased level of chlorophyll-a over the norm could be alarming, and that’s what we’re looking for from the satellite data,” he said.

Nima and his team have developed an algorithm to take the data collected by Landsat 8 over lakes, analyze it, and create a product that tells local water or recreation managers where that increase in chlorophyll-a might be. To get from the raw data to the usable product involves multiple steps, including accounting for atmospheric particles and gases that might otherwise skew the results.

“Not everyone has access to the computing power to be able to process satellite images, or the time or expertise,” Pahlevan said. “Having these products readily available to the community will significantly increase the number of people who can use the satellite data products.”

These Landsat aquatic reflectance products are still provisional, he stressed, but they are newly available from the USGS, which provides all Landsat data as well as other data products for free.

“Data products convert the complex observations made by the instrument to the kind of information people need,” said Jeff Masek of NASA Goddard, project scientist for the upcoming Landsat 9 satellite. “They allow allow people who aren’t as familiar with remote sensing complexities to make use of the data.”

Landsat 9, which is scheduled to launch in September 2021, has all the attributes of Landsat 8 that allow it to quantify chlorophyll-a, and will have added capabilities to distinguish between even more intensities of light reflecting from water bodies and other surfaces. Scientists are looking forward to future satellites as well. Landsat Next, the satellite following Landsat 9, could have additional capabilities that allow it to better detect the specific organisms that cause harmful blooms, and not just benign phytoplankton growth that doesn’t release any concerning toxins.

“We’re seeing more water quality issues around the world,” Masek said, “which is why we’re so interested in the capability to monitor them.”’ 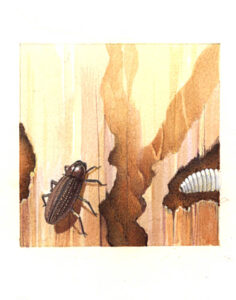 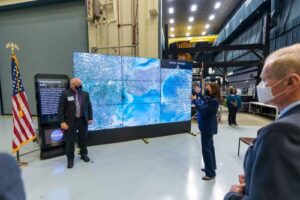 Landsat 9’s first light images provide a preview of how the mission will help people manage vital natural resources and understand the impacts of climate change.