The Grapes of Landsat

The Grapes of Landsat 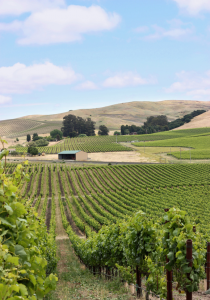 [By Matt Davenport for the AGU GeoSpace blog] California’s persistent drought is forcing grape growers to keep a more-attentive-than-normal eye on their vines, as water shortages and elevated temperatures alter this year’s growing season.
“This year, we’re going to have to be more vigilant than ever,” said Domenick Bianco, a vineyard manager with Renteria Vineyard Management at a January press conference in Napa Valley.
Now, scientists are working to assist growers on the ground with a set of watchful eyes orbiting the Earth. Using satellite imagery data, Forrest Melton of the NASA Ames Research Center and his colleagues are aiming to give farmers a more complete picture of their fields’ irrigation needs.
“Growers are in the best position to determine how much water their crops need,” said Melton, a senior research scientist at NASA. “Our goal is to provide them with a consistent reference that they can use to make decisions about how they can best manage water on their farm.”
The satellite data comes from the Landsat program — a joint venture by NASA and the U.S. Geological Survey to record the changing face of the Earth’s surface, said Lars Pierce, co-director of the Watershed Institute at California State University, Monterey Bay. A pair of satellites orbits the Earth at a distance of more than 400 miles above the surface, with nearly every quarter acre of the planet imaged once every eight days.
By collecting satellite images, scientists and farmers can track changes in crop coverage and vitality. Larger, lusher crop canopies will demand more water.
The satellite data is combined with weather data from the California Irrigation Management Information System, or CIMIS. With this data, scientists can determine how much of the water put into the field by irrigation will be lost to evaporation and transpiration, or water vapor escaping to the atmosphere from a plant’s pores. CIMIS has more than 140 stations across the state updating every hour, Melton said.
By knowing how much area a crop occupies, how green it is and what the weather is like around the plant, Melton and his colleagues calculate a crop coefficient for each field. The crop coefficient is a number that advises farmers how much water to give their crops. But this doesn’t reduce farming to a paint-by-number problem, Melton said.
“It’s not intended to be prescriptive. It’s intended to be a guide,” he said.
Though the project is still in a prototype phase, it is nearing a public unveiling, Melton said. The team recently tested their system at a U.S. Department of Agriculture farm site in the Salinas Valley – birthplace of John Steinbeck – with broccoli and lettuce.
Both crops grew as well using the satellite system as they did using normal practices, but the SIMS system helped reduce water use by up to 33 percent, Melton said.
Grapes, however, are a fruit of a different color.
“They’re a unique crop,” said Daniel Bosch, director of viticulture at the Robert Mondavi Winery in Oakville, Calif. The winery and its parent company, Constellation Brands, have been working with researchers to expand SIMS coverage to vineyards.
Winemakers like to keep moisture levels low. The best wine grapes, especially those used in red wines, work harder to get the moisture out of the soil, said Pierce. To ensure that happens, farmers keep the soil drier than they would for other crops.
If growers over-water, leaves on the vine will flourish, but at the expense of grapes and, ultimately, wine quality, Pierce said. On the other hand, “the challenge in a dry year is not to under-irrigate and apply too much stress.”
Growers using the prototype system have identified when they were over-watering their crops, but they also diagnosed a few instances where they were under-watering their grapes. One large grower, E. & J. Gallo Winery, is currently working with the system. About 10 more vineyards across California plan to test it this year, Pierce said.
While a fully operational system won’t be ready for this year’s grape-growing season, its developers are optimistic that, in the near future, they can offer easily-digested SIMS data to farmers throughout California at little to no cost.
In the meantime, getting the word out about their progress might do some agricultural good, Bosch suggested.
“I’m hoping what will happen is that with the drought there will be a greater awareness of these kinds of tools and a greater ability to measure what we’re doing,” he said. “I think we’ll all learn on how to be better farmers.”
AGU GeoSpace guest blogger Matt Davenport is a science writer and graduate student in the University of California Santa Cruz Graduate Program in Science Communication. This post also appears on the UCSC student blog, Out of the Fog.
Further Reading:
+ Landsat: Making a Difference, One User at a Time
+ Landsat Data Addresses Needs of California Growers
+ Researchers Estimate Vineyard Area Using Landsat