Landsat 8 measures different ranges of frequencies along the electromagnetic spectrum – a color, although not necessarily a color visible to the human eye. Each range is called a band, and Landsat 8 has 11 bands. Landsat numbers its red, green, and blue sensors as 4, 3, and 2, so when we combine them we get a true-color image such as this one: 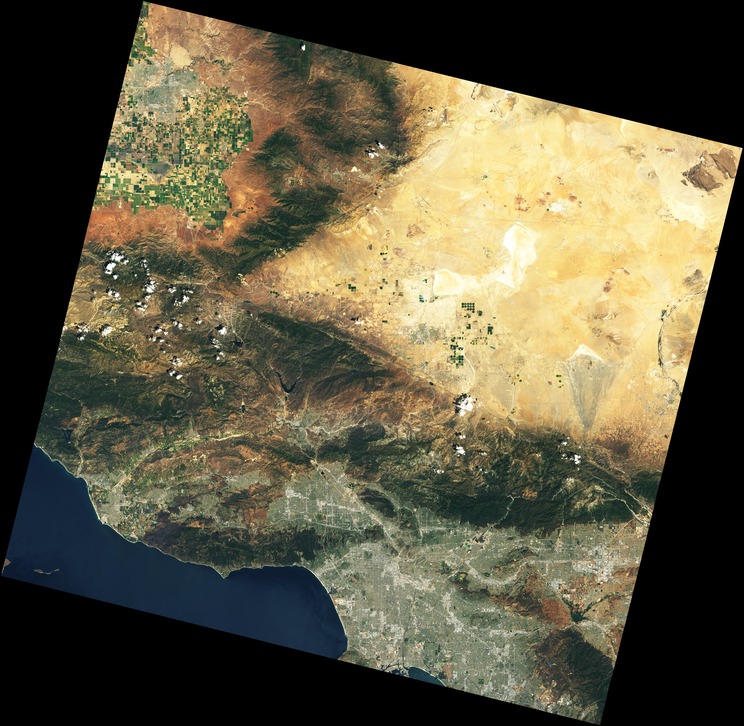 Landsat 8 view of the Los Angeles area, May 13th, 2013. The image is rotated so north is up. All image data courtesy of the U.S. Geological Survey.

Have a look at the full list of Landsat 8’s bands:

Of its 11 bands, only those in the very shortest wavelengths (bands 1–4 and 8) sense visible light – all the others are in parts of the spectrum that we can’t see. The true-color view from Landsat is less than half of what it sees. To understand the value of all the bands, let’s look at them each in turn:

Band 1 senses deep blues and violets. Blue light is hard to collect from space because it’s scattered easily by tiny bits of dust and water in the air, and even by air molecules themselves. This is one reason why very distant things (like mountains on the horizon) appear blueish, and why the sky is blue. Just as we see a lot of hazy blue when we look up at space on a sunny day, Landsat 8 sees the sky below it when it looks down at us through the same air. That part of the spectrum is hard to collect with enough sensitivity to be useful, and Band 1 is the only instrument of its kind producing open data at this resolution – one of many things that make this satellite special. It’s also called the coastal/aerosol band, after its two main uses: imaging shallow water, and tracking fine particles like dust and smoke. By itself, its output looks a lot like Band 2 (normal blue)’s, but if we contrast them and highlight areas with more deep blue, we can see differences: 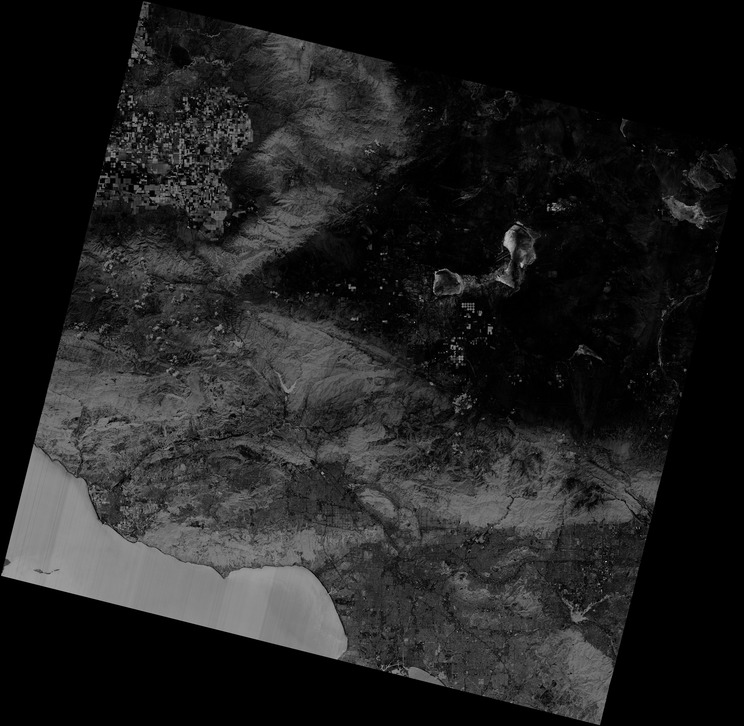 Band 1 minus Band 2. The ocean and living plants reflect more deep blue-violet hues. Most plants produce surface wax (for example, the frosty coating on fresh plums) as they grow, to reflect harmful ultraviolet light away.

Bands 2, 3, and 4 are visible blue, green, and red. But while we’re revisiting them, let’s take a reference section of Los Angeles, with a range of different land uses, to compare against other bands: 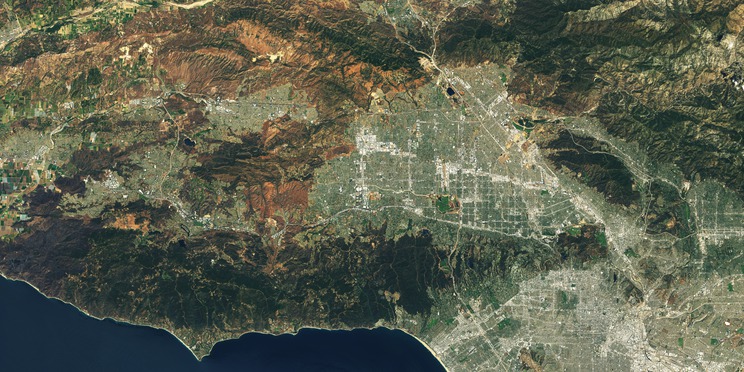 Part of the western LA area, from agricultural land near Oxnard in the west to Hollywood and downtown in the east. Like most urban areas, the colors of the city average out to light gray at this scale.

Band 5 measures the near infrared, or NIR. This part of the spectrum is especially important for ecology because healthy plants reflect it – the water in their leaves scatters the wavelengths back into the sky. By comparing it with other bands, we get indexes like NDVI, which let us measure plant health more precisely than if we only looked at visible greenness. 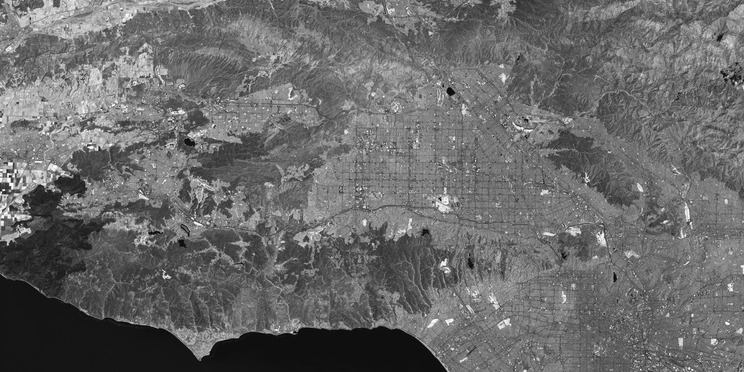 The bright features are parks and other heavily irrigrated vegetation. The point near the bottom of this view on the west is Malibu, so it’s a safe bet that the little bright spot in the hills near it is a golf course. On the west edge is the dark scar of a large fire, which was only a slight discoloration in the true-color image.

Bands 6 and 7 cover different slices of the shortwave infrared, or SWIR. They are particularly useful for telling wet earth from dry earth, and for geology: rocks and soils that look similar in other bands often have strong contrasts in SWIR. Let’s make a false-color image by using SWIR as red, NIR as green, and deep blue as blue (technically, a 7-5-1 image): 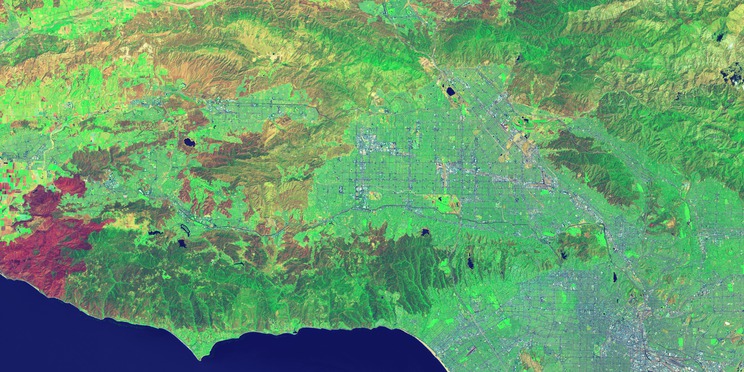 The fire scar is now impossible to miss – reflecting strongly in Band 7 and hardly at all in the others, making it red. Previously subtle details of vegetation also become clear. It seems that plants in the canyons north of Malibu are more lush than those on the ridges, which is typical of climates where water is the main constraint on growth. We also see vegetation patterns within LA – some neighborhoods have more foliage (parks, sidewalk trees, lawns) than others.

Band 8 is the panchromatic – or just pan – band. It works just like black and white film: instead of collecting visibile colors separately, it combines them into one channel. Because this sensor can see more light at once, it’s the sharpest of all the bands, with a resolution of 15 meters (50 feet). Let’s zoom in on Malibu at 1:1 scale in the pan band: 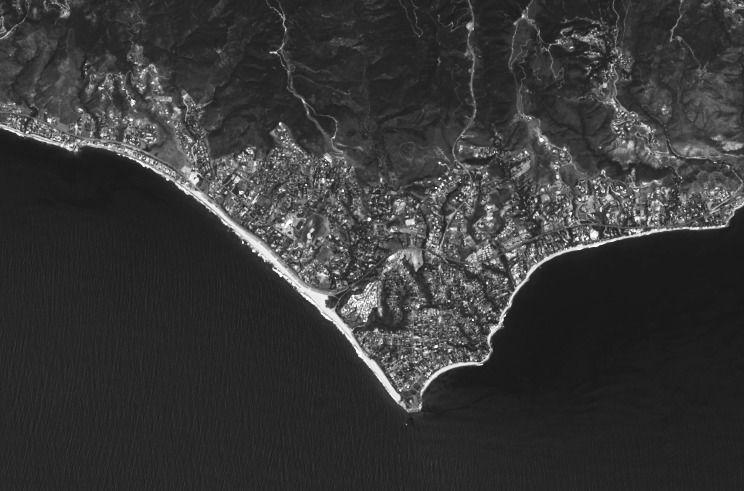 And in true color, stretched to cover the same area: 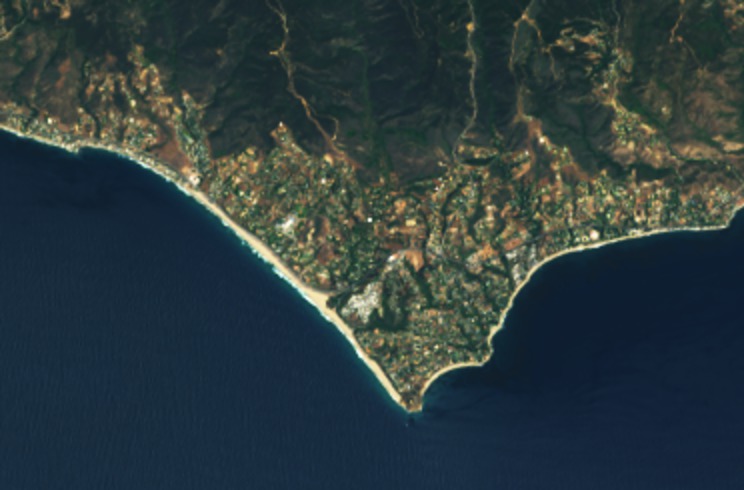 The color version looks out of focus because those sensors can’t see details of this size. But if we combine the color information that they provide with the detail from the pan band – a process called pan sharpening – we get something that’s both colorful and crisp: 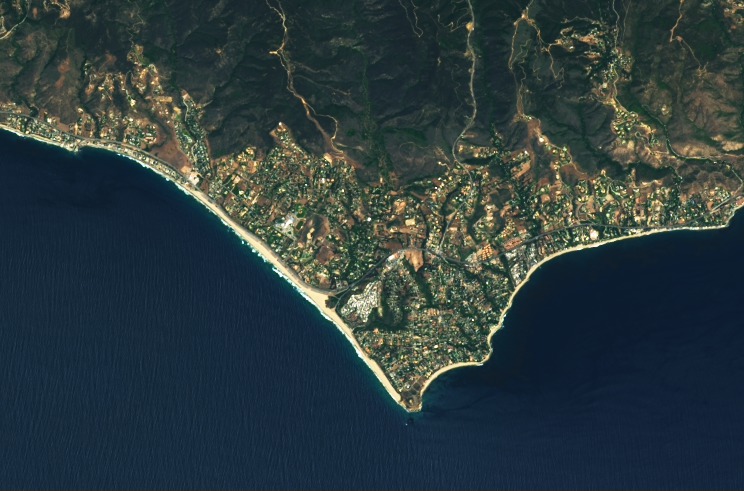 Pansharpened Malibu, 15 m (50 ft) per pixel. Notice the wave texture in the water.

Band 9 shows the least, yet it’s one of the most interesting features of Landsat 8. It covers a very thin slice of wavelengths: only 1370 ± 10 nanometers. Few space-based instruments collect this part of the spectrum, because the atmosphere absorbs almost all of it. Landsat 8 turns this into an advantage. Precisely because the ground is barely visible in this band, anything that appears clearly in it must be reflecting very brightly and/or be above most of the atmosphere. Here’s Band 9 for this scene:

Band 9 is just for clouds! Here it’s picking up fluffy cumulus clouds, but it’s designed especially for cirrus clouds – high, wispy “horsetails”. Cirrus are a real headache for satellite imaging because their soft edges make them hard to spot, and an image taken through them can contain measurements that are off by a few percent without any obvious explanation. Band 9 makes them easy to account for.

Bands 10 and 11 are in the thermal infrared, or TIR – they see heat. Instead of measuring the temperature of the air, like weather stations do, they report on the ground itself, which is often much hotter.

A study a few years ago found some desert surface temperatures higher than 70 °C (159 °F) – hot enough to fry an egg. Luckily, LA is relatively temperate in this scene: 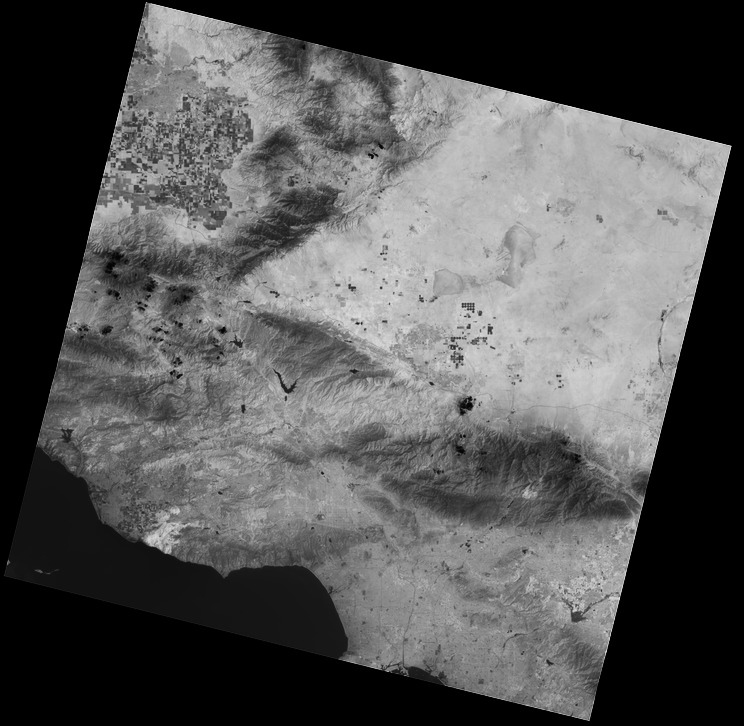 Notice that the very dark (cold) spots match the clouds in Band 9. After them, irrigated vegetation is coolest, followed by open water and natural vegetation. The burn scar near Malibu, which is covered in charcoal and dry, dead foliage, has a very high surface temperature. Within the city, parks are generally coolest and industrial neighborhoods are warmest. There is no clear urban heat island in this scene – an effect that these TIR bands will be particularly useful for studying.

Bands can be combined in many different ways to reveal different features in the landscape. Let’s make another false-color image by using this TIR band for red, a SWIR band for green, and the natural green band for blue (a 10-7-3 image):

Urban areas and some kinds of soil are pink. In the true-color image, wild vegetation is almost uniformly olive-colored, but here we see a distinction between peach-colored scrubland, mahogany-colored woodland, and so on. Cooling onshore breezes appear as a slight purple gradient along the coast of the city. The colored strips on either side of the image are areas where not all sensors have coverage.