by Kate Ramsayer, NASA’s Goddard Space Flight Center
Aug 28, 2019 • Ice fronts have retreated, rocky peaks are more exposed, fewer icebergs drift to the ocean: the branching network of glaciers that empty into Greenland’s Sermilik Fjord has changed significantly in the last half century. Comparing Landsat images from 1972 and 2019, those changes and more come into view. 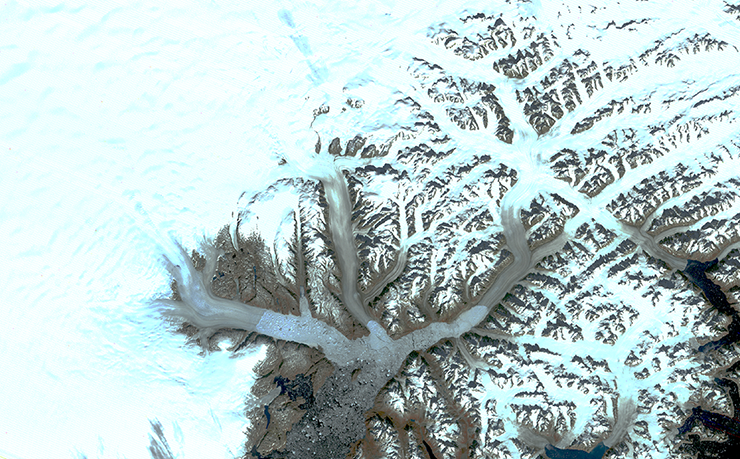 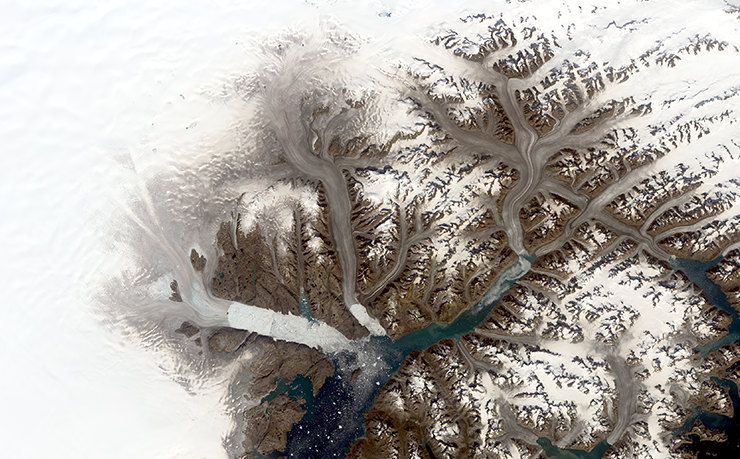 Glaciers in southeastern Greenland including, from left, Helheim, Fenris and Midgard are seen in a Landsat 8 image from Aug. 12, 2019 (right) and a composite image from Landsat 1 scenes collected in September 1972 (left). Comparing images across the span of the Landsat mission provides a record of almost five decades of change to this region of southeast Greenland. See animated GIF here. Image credits: NASA/Christopher Shuman, USGS

The glaciers appear brownish grey in this true-color Landsat 8 satellite image from Aug. 12, 2019. The color indicates that the surface has melted, a process that concentrates dust and rock particles and leads to a darker recrystallized ice sheet surface.
The darker melt surface in 2019 extends much farther onto the ice sheet than it did in 1972, when the first Landsat satellite gathered data on the area, said Christopher Shuman, a glaciologist with the University of Maryland, Baltimore County, at NASA Goddard Space Flight Center in Greenbelt, Maryland. Landsat is a joint mission of NASA and the U.S. Geological Survey.
Helheim Glacier, one of the largest and fastest flowing of its kind in Greenland, has retreated approximately 4.7 miles (7.5 kilometers) up a wide fjord in the time between the two scenes, leaving a jumble of sea ice where its calving front used to be. To the east, Midgard Glacier has retreated approximately 10 miles (16 kilometers), splitting into two branches farther up the fjord. Changes to the rocky outcrops of the area’s mountains and smaller tributary glaciers are also visible by comparing the two Landsat images. 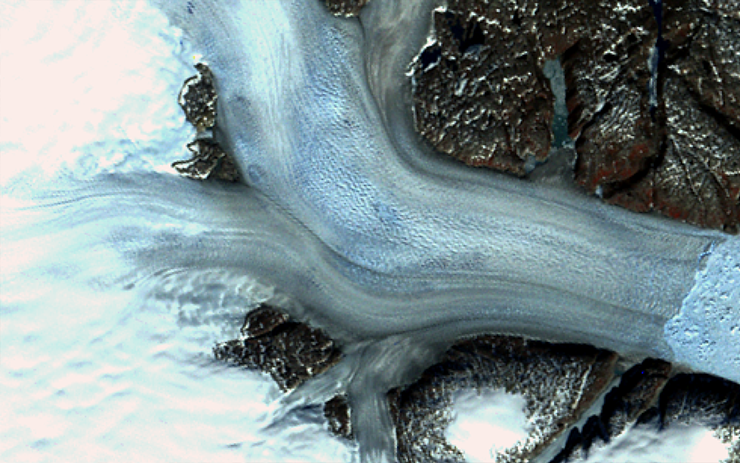 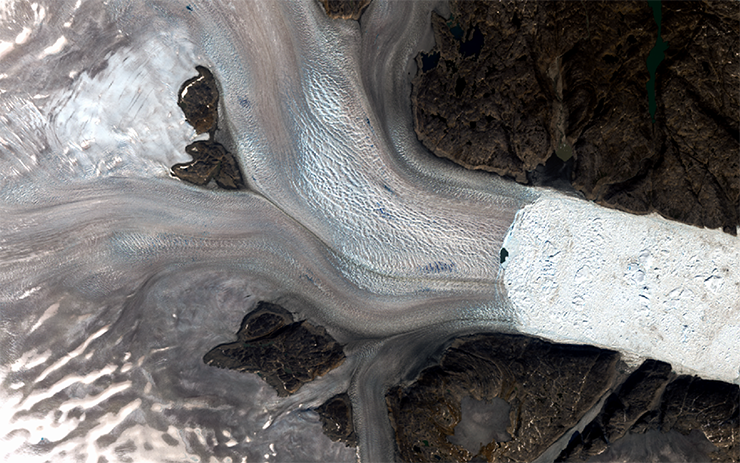 The Helheim Glacier is seen in a close-up of the images above. One of the largest glaciers in Greenland, Helheim has retreated approximately 4.7 miles (7.5 kilometers) between when these Landsat scenes were collected in 1972 (left image) and 2019 (right image). As the glacier lost ice over the last 47 years, the cliff walls along the glacier and the rocky outrcrops in the middle become more exposed. Image credits: NASA/ Chris Shulman, USGS

“There’s a lot more bare rock visible now, which used to be covered with ice,” Shuman said. “And all these little glaciers are all getting slammed, as well as the bigger ones like Helheim, Fenris and Midgard. There are scores of examples of change just in this one area.”
In a close-up of the Helheim Glacier, a patch of open water is visible right at the calving front. Three days after Landsat 8 collected the image over Helheim and its neighboring glaciers, NASA’s Oceans Melting Greenland (OMG) project flew over that open patch of water in an airplane and dropped a temperature-measuring probe that detected warm water at the ice front. OMG is examining how oceans melt glaciers from below, even as air temperatures warm the ice from above. 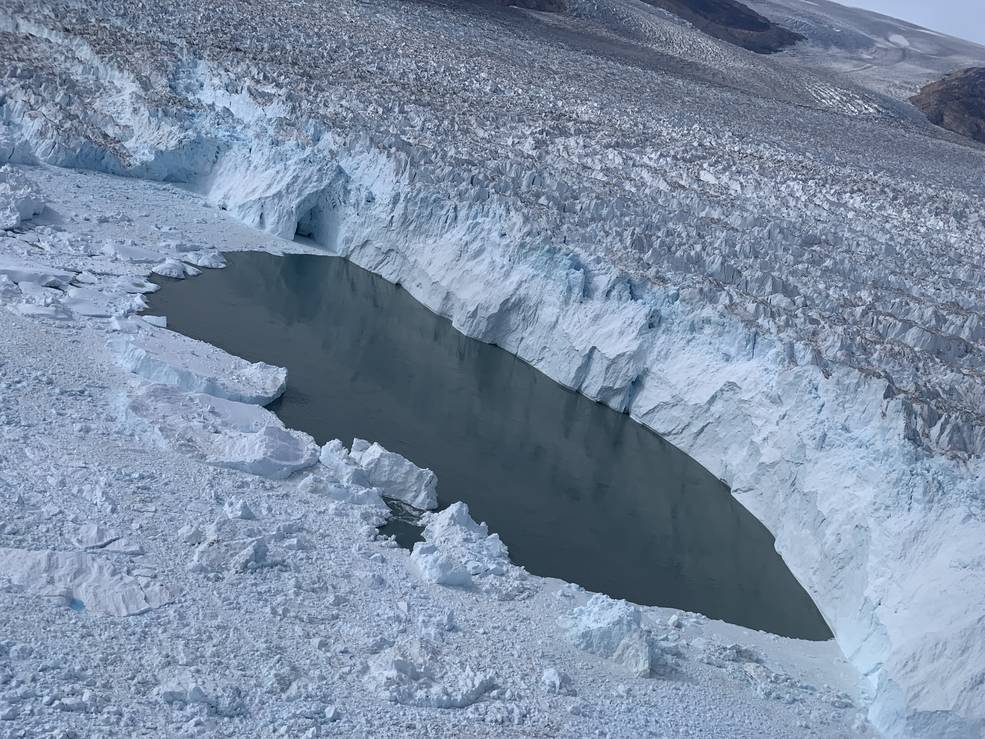 NASA’s Oceans Melting Greenland campaign flew over a region of open water at the calving front of Helheim Glacier on Aug. 15, 2019, dropping a temperature probe that detected warm water. The open water is visible in the 2019 Landsat image above. Credits: NASA /Josh Willis

Unusually warm air temperatures this summer have caused record melt across Greenland. Approximately 90% of the surface of Greenland’s ice sheet melted at some point between July 30 and Aug. 2, during which time an estimated 55 billion tons of ice melted into the ocean, according to the National Snow and Ice Data Center. Shuman also tracked the unusual warm weather at the top of the Greenland Ice Sheet, 10,550 feet (3,216 meters) above sea level, where temperatures were above freezing for more than 16.5 hours total during July 30 and 31.

PrevPreviousNew Landsat Infrared Instrument Ships from NASA
NextHot in the City, And Hotter Still in Low-Income AreasNext
Prev
Next
On Key