A Geospatial Poem for the Ages

A Geospatial Poem for the Ages

Dr. Emil Cherrington is the Lead Regional Science Coordinator for West Africa with the NASA SERVIR program. He works from the Earth System Science Center at the University of Alabama in Huntsville. SERVIR is a joint project of NASA and the U.S. Agency for International Development that uses Earth-observing satellites and other geospatial resources to provide pertinent information that developing nations can use in their environmental decision-making.
This year at #AGU18, Emil and his co-authors are presenting a poem titled “In the Americas, We Use Satellites to Sow Dreams in the Soil” that they wrote for a science communication session, “Climate Literacy: Engaging the Public and Inspiring Action Through Effective Science/Arts/Sustainability Communication.”
Emil took some time out to answer our questions about his poem. His answers are below, followed by the poem: 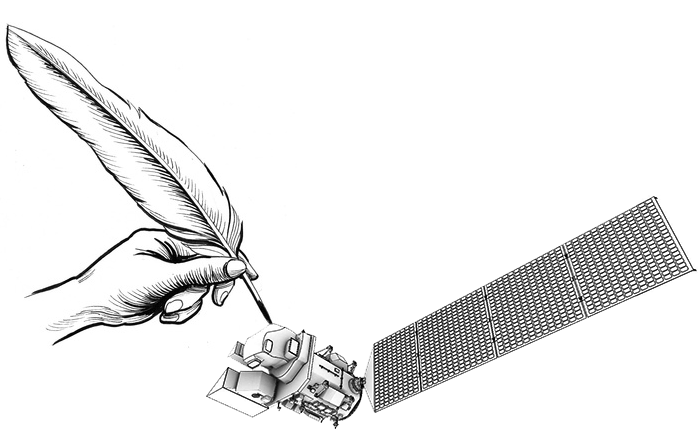 What were the science inspirations behind this poem?
I wrote the consolidated poem following consultation with other SERVIR and NASA Capacity Building Program colleagues (Betzy Hernandez, Africa Flores, Nancy Searby, Dan Irwin, Ashutosh Limaye).
The science motivation for the poem was, in general, to examine how satellites are used to address development challenges—which is essentially the focus of SERVIR.
Integrating satellite and broader Earth-observation data into resource management in general is also a large part of what GEO’s AmeriGEOSS initiative is doing.
The motivation for including Landsat and other NASA satellite assets was that in SERVIR’s work across the globe (and in the Americas in particular) Landsat has really been the workhorse for countries’ monitoring of their landscapes, as well as significant for water resource management.
From 2005 to present, there are noteworthy examples of how scientists from across SERVIR’s global network of hubs have done very innovative EO work using Landsat.

How does poetry help science communication?
Quoting my NASA supervisor, and SERVIR Program Manager, Dan Irwin, poetry and the arts humanize science.
Our participation in this particular AGU session (originally entitled “Rhyme Your Research”) was also to communicate—in an alternative format—some of the work we have been doing with AmeriGEOSS and SERVIR. We could give a PowerPoint explaining what either AmeriGEOSS or SERVIR are, but we thought that a poem would be a fun way of trying to convey the message about these initiatives. It also required looking at the work we are doing—in collaboration with a host of partners—in a different light than we normally do. We think we have captured some of the essence of both AmeriGEOSS and SERVIR in our two-part poem.

How do you use Landsat data in your research work?
In an earlier role with SERVIR, I used Landsat data in a study of land cover change across Belize. That Belize study was done shortly after the opening of the Landsat archive and the data is still used as the benchmark by management organizations in Belize.
Following that, I also used Landsat data in conjunction with MODIS data to examine the intricacies of mapping ecologically consistent forest types in French Guiana.
In my current role as SERVIR’s Regional Science Coordination Lead for West Africa (and as a Research Scientist at the University of Alabama in Huntsville), I help to oversee innovative work being done with Landsat by collaborators at SERVIR-West Africa’s consortium members—centers of excellence like AGRHYMET, CERSGIS, and CSE which have extensive experience using Landsat data.
All of SERVIR’s hubs have been actively generating products from Landsat data, and that’s a testament to both the utility of Landsat data and the open data policy.

And now, the poem to enjoy:

In the Americas, We Use Satellites to Sow Dreams in the Soil

Complexions as beautiful and diverse

As the types of soils

From Alaska to Chile

The food we eat

Or the rivers we swim, in all types of weather extremes

We swim on, march on

In a shared belief

Shared beliefs in the value

Of observing our Earth

More than a dollar value

But the value of building a better tomorrow

So when I look at an AVHRR, CBERS, Landsat, SAC-C, or RadarSat image,

I see our shared humanity

With an American flavor

It’s daunting work; we try to stay ahead of the curve

We have encouraging taskmasters responsible for supervision,

Making sure that we accomplish NASA’s noble mission

To bring the very best of Earth science to other regions

It is done in close partnership with USAID

We use satellites – not natural, but man-made.

Not only are we experts in satellite scanning

But also in consultation, needs assessments, and service planning

We love Landsat, ASTER, and MODIS, but we need more Hyperions

We strive to foster self-reliance in Africa, Asia, and Latin America

Our program is unique; there is no replica.

We keep trying to make the world better, before tomorrow’s dawn

“Dawn is a fisherman” is said in my native land

To our fellow brethren, through science, we try to lend a hand

To move from observations to actions and impacts in the field

There, your questions will hopefully be met.

SERVIR is LIFE; for me, SERVIR is FAMILY

I may exaggerate, but it’s not a fallacy.

A poem about this great program was probably not expected,

But we all inhabit spaceship Earth; we are all connected.


Anyone can freely download Landsat data from the USGS EarthExplorer or LandsatLook.

PrevPreviousDetermining Penguin Diet with Landsat (and Piles of Poo)
NextThe Shifting Irrigation Patterns of the U.S. High Plains AquiferNext
Prev
Next
On Key